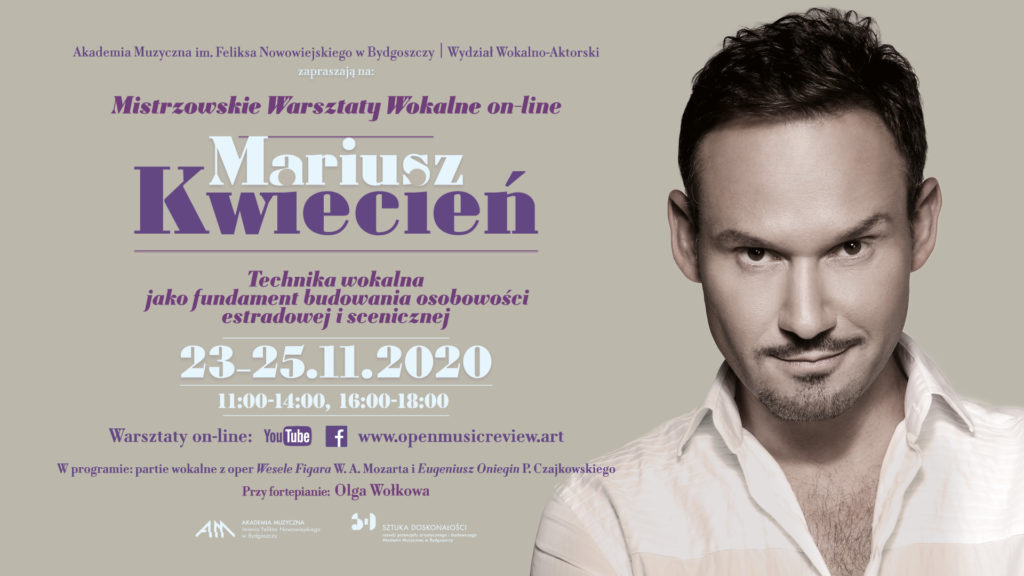 We invite you all for the Vocal Master Classes with Mariusz Kwiecień, entitled ‘Vocal Technique as a Ground for Building Stage Personality’.

born in Kraków; he graduated from the Academy of Music in Warsaw with Włodzimierz Zalewski. Today, he is successful on the opera stages in the world. Famous for his beautiful voice, great musicality and colourful stage personality, he performs in Europe, North America and Asia in the most prestigious opera theatres and with recognised symphonic orchestras. Most frequently, he collaborates with Metropolitan Opera, Lyric Opera of Chicago, Seattle Opera, San Francisco Opera, Covent Garden and Opera Bastille in Paris.

He is a graduate of the Opera’s Lindemann Young Artist Development Program. Recently, he has sung in MET: playing Marcello in La bohème by Puccini, Silvio in Pagliacci by Leoncavallo, Malateste in Don Pasquale and Enrico in Lucia di Lammermoor by Donizetti, Almaviva in Le nozze di Figaro and Guglielmo in Cosi fan tutte by Mozart.

He performed in the Covent Garden in London as Marcello in La bohème by Puccini and as Germont in La traviata by Verdi. At Opera Bastille in Paris, he played Belcore in L’elisir d’amore by  Donizetti and in Palais Garnier he played the title character in Eugene Onegin by Tchaikovsky. He was Onegin as well in Bolshoi Theatre and Bayerische Staatsoper in Munich. He performed the role of Gugliemo from Cosi fan tutte in the Grand Theatre de Geneve in Switzerland and Ottokar in Der Freischütz by Weber in La Scala in Milan. The audience in Vienna could hear Mariusz Kwiecień as Belcore in L’elisir d’amore by  Donizetti and as Duke Robinson in Il matrimonio segreto by Domenico Cimarosa.