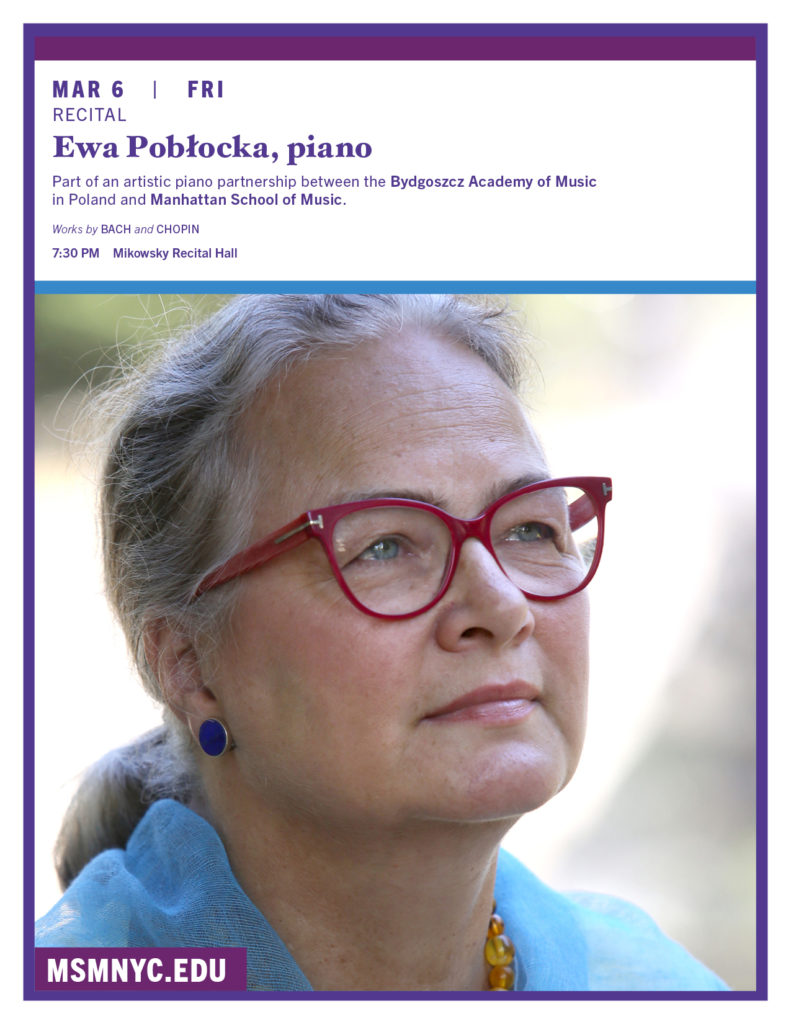 Part of an artistic piano partnership between the Bydgoszcz Academy of Music in Poland and Manhattan School of Music.

and as part of the partnership, at the Bydgoszcz Academy of Music, Poland:

Partita No. 2 in C Minor

After the event, you may greet the artist in the adjoining Mikowsky Gallery. 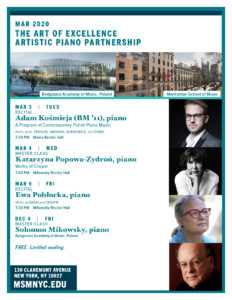 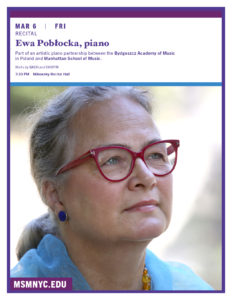 Pobłocka is a prizewinner of the 10th International Fryderyk Chopin Piano Competition in Warsaw (1980), where she also won the Polish Radio prize for the best performance of mazurkas. She studied at Gdańsk Music Academy under Zbigniew Śliwiński and Jerzy Sulikowski, graduating with honours in 1981. She completed postgraduate studies with Conrad Hansen in Hamburg (1982) and benefitted from consultation with Jadwiga Sukiennicka, Rudolf Kerer, Tatiana Nikolaieva, and Martha Argerich. She won first prize in the International Viotti Music Competition in Vercelli (1977) and the gold medal in the International Festival of Young Laureates in Bordeaux (1979).

Ewa Pobłocka has performed throughout Europe and the Americas, as well as in China, Indonesia, South Africa, Singapore, South Korea, Japan, and Australia, in such venues as the Herkules-Saal in Munich, Musikhalle in Hamburg, St. Petersburg Philharmonic Hall, Théâtre des Champs Elysées in Paris, Kyoi Hall in Tokyo, Auditorio Nacional in Madrid, Barbican Centre and Wigmore Hall in London, Musikverein in Vienna, Lincoln Center in New York, Glenn Gould Studio in Toronto, and Sala Cecília Meireles in Rio De Janeiro, among others. She has played as a soloist with the London Symphony Orchestra, English Chamber Orchestra, Orchestra del Maggio Musicale Fiorentino, Bayerischers Rundfunkorchester, Sinfonia Varsovia, and Polish National Radio Symphony Orchestra and has repeatedly toured as a Warsaw Philharmonic Orchestra soloist under the baton of Kazimierz Kord and Antoni Wit. An accomplished chamber musician, she has performed with the Silesian Quartet as well as with many singers from Poland and abroad. She has given numerous first performances and made world-premiere recordings of works by contemporary Polish composers, including Andrzej Panufnik, Witold Lutosławski (first Polish recording of the Piano Concerto with the Polish Radio Symphony Orchestra under the composer’s baton), Paweł Szymański, and Paweł Mykietyn.

Pobłocka has worked with European radio stations and recorded more than 50 discs (for Polskie Nagrania, Deutsche Grammophon, CD Accord, and Bearton, among others). Many of her recordings have won prizes and critical acclaim, including two Fryderyk statuettes (both in 1998), two Record of the Year titles awarded by Studio magazine (in 1996 and 1998), and the John Field Medal for 9 the recording of his complete Nocturnes. Her last album with Book I of Bach’s Well-Tempered Clavier (NIFC, 2018) was chosen as recording of the month by Gramophone magazine and received special commendation in the Record Geijutsu.